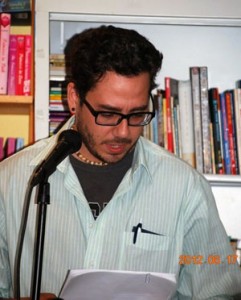 When I returned to school at twenty-five, my first classes were at Cumberland County College, a rural community college near the peach farm where I had worked off and on since dropping out of high school, dropping out of college (at least three or four times), joining the Navy on a whim, leaving the Navy on a mission, and generally not doing much with my life. Once, I said to my now wife, then girlfriend, that I might want to attend Rowan, to study accounting or something, a field I had no real interest in but that would complement the financial planner position that I had weaseled myself into after taking a long hiatus from farm life. I liked wearing a suit. My wife must’ve seen something in me, because with genuine sincerity she said, “Go to Rutgers, Carmen. You belong at Rutgers.”

“I can’t drive up to New Brunswick every day,” I said.

Truth is, that was the first time I had ever heard of Rutgers-Camden. In the end, I ended up deciding to study English, as a pre-law major, taking community college classes that mirrored the general requirements for a degree at Rutgers. I turned down a full scholarship to LaSalle University (the only other college to which I applied because the application was free) in Philadelphia because I was so impressed with Rutgers-Camden’s English department.

I ended up getting both my bachelor’s and master’s degrees at Rutgers-Camden. Both degrees were in English; pre-law got replaced with an earnest love for literature. As a graduate student, I was fortunate enough to be awarded a teaching assistantship, and so I taught writing for two years —and learned quickly what I was supposed to do with my life.

Now I am finishing another graduate program at Columbia University. I’m writing a book that has a shot of being published. I am also one of the few graduate teaching fellows at Columbia, where I often rely on what I learned at Rutgers to teach students of the Ivy League.

For me, a first-generation college graduate who always loved to read and dreamed of being a writer, Rutgers-Camden was a godsend. To remove it from South Jersey means removing opportunity from those who already feel as though there are few opportunities, if any. Increase the reach of Rutgers-Camden. Maybe I wouldn’t have gotten in so much trouble when I was young had I known it was there (or maybe some aspects of life are simply unavoidable.)

This discussion is now closed.