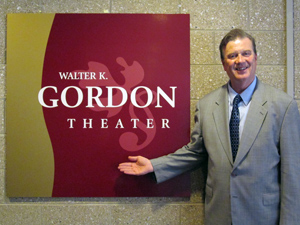 Everyone should dare to dream. John C. Kendall lives his life by this adage. A graduate of the Camden College of Arts and Sciences in 1980, this theater major’s passion for the stage has never dimmed, even after working at L-3 Communications for thirty-two years and raising three children. A member of the Screen Actors Guild (SAG) who has done background work in films, John recently tried his hand at a different aspect of theater. Always interested in politics and finding the dynamics within politics to be inherently dramatic, John wrote a play called Kennedy/Reagan, in which Senator Edward Kennedy and President Ronald Reagan discuss and debate important events and issues, and share the stories of their lives. The Dramatists Guild of America read the play, and subsequently accepted John as a member. This membership allowed John the opportunity to stage his play at the Frederick Lowe Room of the Guild, on Broadway in New York! John was also able to obtain a SAG New Media Ultra Low Budget Agreement in order to produce a movie version of Kennedy/Reagan, which is currently being edited, and will soon be available on amazon.com. 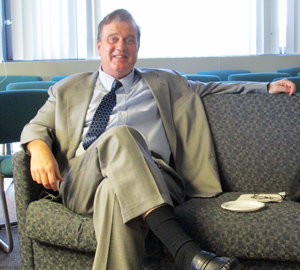 Truly, John’s talent was nurtured while a student at Rutgers-Camden. In 1976, he was drawn to Rutgers-Camden by the generous financial support he received, but he stayed because of the gifted faculty who guided him through his four years on campus. Taught by such top talent as Zeke Berlin, Marty Lafferty, and Paul B. Kelly, John received instruction from Yale School of Drama graduates and a director who had worked with such stars as Gloria Swanson. John jumped at every opportunity that came his way, appearing in every possible Rutgers-Camden production while a student.

John’s three children continued the Rutgers-Camden tradition; his son Sean graduated in 2007, his daughter Melissa in 2010, and his son Jason is currently a senior. Their presence on campus helped John to further strengthen his ties to Rutgers-Camden, even recently appearing in a show with his daughter Melissa under the direction of Associate Professor Paul Bernstein.

Rutgers-Camden and its dynamic faculty inspired John and encouraged him to always pursue his dream, a thought he’d like to echo and share with Rutgers-Camden’s current and prospective students. “It’s like the song by Rodgers and Hammerstein,” the theater connoisseur says, referencing the song Happy Talk. “You got to have a dream, / If you don’t have a dream, / How you gonna have a dream come true?” John’s dream has certainly come true, and this is only the beginning. 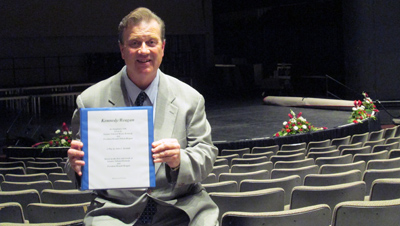 One comment on ."We R Rutgers-Camden: John C. Kendall"

This discussion is now closed.