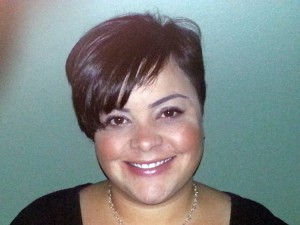 This past May, if you were seated at the Susquehanna Bank Center watching students from the Graduate School-Camden walk across the stage, chances are you saw Roxanne Huertas, a May 2013 recipient of a master of arts in liberal studies degree, lift her arms and cheer as she was handed her diploma. “It was definitely my favorite moment from my time here at Rutgers-Camden!” she exclaims.

The secretary for the Department of History, Department of Philosophy and Religion, the Graduate Liberal Studies Program, and the Mid-Atlantic Regional Center for the Humanities (MARCH)first became interested in pursuing her master’s degree when she was serving as secretary for the Department of Computer Science and the Department of Physics.“I was surrounded by students and faculty who were conducting research, and I knew I wanted to do something academic, as well.” Not sure what direction she wanted to take, Roxanne applied to and was accepted by the master of arts in liberal studies program, a program that encourages interdisciplinary learning.

In order to graduate from the graduate liberal studies program, students must complete a Capstone project, a written paper of about thirty pages in length that explores a topic of the student’s choosing.Always interested in biracial representation in literature, Roxanne choose to write her Capstone paper on how biracial heroines in literature can represent society’s arrival as a post-racial society.Writing her paper, called “The Canary in the Post-Racial Coal Mine: The 21st Century Mulatto in American Fiction” proved to be both Roxanne’s greatest challenge, and her greatest victory.Under the guidance of her faculty mentor, Dr. Keith Green, Assistant Professor of English, Roxanne read two contemporary novels, Caucasia by Danzy Senna, and The Girl Who Fell From the Sky by Heidi Durrow, and compared them to characters in antebellum slave literature and novels from the Harlem Renaissance. Never having undertaken a project of this magnitude, Roxanne was apprehensive, but her genuine interest in the material helped her to simply enjoy the project, rather than be anxious about it.

While enrolled in the graduate liberal studies program, Roxanne realized how much she enjoyed both research and helping others, which led her to explore another graduate program, the master of library information science (MILS). Roxanne begins this new graduate program in January, and is excited to continue on this new journey, which she hopes to ultimately lead to her dream job: an academic librarian, with an emphasis in digital libraries.

Roxanne didn’t always plan on this career trajectory, however. She graduated with a degree in business administration from The College of New Jersey (TCNJ), and shortly thereafter started a job as a benefits specialist at a large company. However, she quickly realized that corporate America was not where she wanted to spend the rest of her career, and began looking for opportunities in other industries. At the time, she lived in the Princeton area, and eventually landed a job in the Department of Health Services at Princeton University.

Her experience at Princeton was so positive that when her husband’s new job required a move back to Roxanne’s hometown of Deptford, she knew she was only interested in working in higher education, which led her to apply to, and be hired by, Rutgers-Camden, a place which Roxanne speaks of warmly, saying “Rutgers-Camden is best described as ‘small but mighty’. My job as a department secretary has allowed me to meet so many students and faculty, from all walks of life. I enjoy seeing students overcome their challenges and love to talk to faculty about the research they are performing. It is such an exciting time to be a part of the Rutgers community as we expand and grow, and I hope to continue being a part of this campus for a long time”.

Position: Secretary for the Department of History, Department of Philosophy and Religion, the Graduate Liberal Studies Program, and the Mid-Atlantic Regional Center for the Humanities (MARCH)