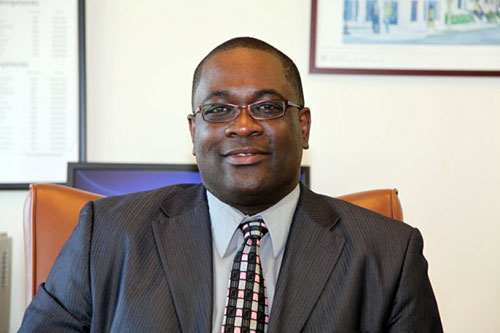 Rutgers-Camden can claim many accomplished graduates.  Our students go on to pursue successful careers in all fields.  Kelvin Jeremiah, who earned his master’s degree in history from the Graduate School-Camden in 1997, has continued Rutgers-Camden’s tradition of accomplishment.  In March 2013, Kelvin was named President and Chief Executive Officer of the Philadelphia Housing Authority (PHA) after serving as Interim Executive Director and Administrative Receiver since June 2012.

Kelvin’s work in the field of affordable housing began because of his desire to make a real and meaningful difference in people’s lives.  His work with the PHA “can be transformative,” he says.  “It’s why I got involved.”  The PHA provides housing and support services to over 80,000 residents in Philadelphia.  It is a service that is desperately needed, considering the large percentage of Philadelphians that live in poverty.  Kelvin’s time at the PHA has been dedicated to making sure that housing for those in need is provided in the most ethical way.

Kelvin came to the PHA in August 2011 as the organization’s first Director of Audit and Compliance.  In this role, he was tasked with rebuilding the agency and complying with all regulations.  During his time in this position, he saved tens of millions of dollars, all of which was earmarked to serve its residents.  In April 2013, the agency was returned to local control, an accomplishment of which Kelvin is very proud and a highlight in his career at the PHA.

Kelvin’s interest in social justice was shaped at Rutgers-Camden, where he obtained a master’s degree in history.  His love of history stems from his upbringing, when his great-grandmother would share her past experiences.  Kelvin was struck by the importance of this oral history, and thirsted to know more.  At age twelve, he immigrated with his family to the United States from Grenada, and settled in New York City.  While in the United States, he noticed that while written history was abundant, oral history, especially that of African-Americans, was largely absent.  He felt a responsibility to those who had come before, and decided to pursue history academically.

He received a bachelor’s degree in history and business administration from Pace University in New York City.  After completing his undergraduate degree, Kelvin knew he wanted to pursue a higher level of study, and applied to a number of graduate programs.  Rutgers-Camden caught his attention when a professor at Pace recommended he contact Dr. Andrew Lees, Professor II of History, and set up an appointment to see the campus.  When he visited, Kelvin was impressed by the graduate history program’s accomplished faculty, and particularly liked the fact that the program’s small size would allow him to receive “hands-on attention.”  Dr. Lees in turn introduced Kelvin to Dr. Philip Scranton, Board of Governors Professor of History.  Dr. Scranton would become Kelvin’s greatest mentor.  Indeed, Kelvin calls the mentoring he received at Rutgers-Camden “worth its price in gold.”

Kelvin calls his time at Rutgers-Camden “the best experience of my academic career,” and that Dr. Scranton is the most influential professor he’s ever had.  Indeed, he is full of praise for his former mentor, saying Dr. Scranton encouraged him to think critically, an invaluable skill.  “Dr. Scranton realized my potential when I didn’t see it myself.  He made me who I am today.”

Though he has already achieved so much with the PHA, Kelvin still has many goals which he plans to meet, including changing the culture of excessive spending and restoring the region’s trust and confidence in the PHA.  He wants to collaborate with other institutions, such as universities, leveraging resources and really “push the boundaries of what we do.”  Kelvin credits Rutgers-Camden with “shaping and expanding my world view, and how I live my life.”  Truly, Kelvin’s life so far is an example of a life well lived.  Rutgers-Camden is very proud to count him as one of our loyal alumni.