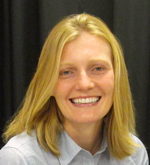 Providing well-qualified and well-equipped teachers to the schools of New Jersey and beyond is a task of vast importance, and one that Dr. Sara Becker engages in every day.  The Graduate Director of the Institute for Effective Education (IEE), who received her Ph.D. in educational psychology from Temple University, has been with IEE (formerly the Teacher Preparation Program) since January 2005, when she joined the program as assistant director and as a part-time lecturer.  She quickly rose up the ranks, becoming associate director in January 2006 and then director in July 2007.  The Teacher Preparation Program morphed into IEE in September 2011, and at that time Sara assumed her current role.  Prior to her time at Rutgers-Camden, Sara taught in Philadelphia.  She primarily worked with second graders and with the Head Start program, a program geared toward pre-kindergarteners whose families qualify as low-income.

Sara’s career in education was not something she planned.  Growing up, she wanted to be a pediatrician, and she structured her life’s path so she could meet that goal.  She majored in biology at LaSalle University, and shortly after her college graduation she entered the Philadelphia College of Osteopathic Medicine (PCOM).  Even before her classes began, she knew the program wasn’t right for her.  She no longer wanted to be a doctor.  Despite her reservations, she stayed in the program for a year and a half, but simultaneously began researching other opportunities.

While enrolled at PCOM, Sara began working as a teacher at the Gutman Early Learning Center in order to supplement her income.  Initially, she thought it would be a short-term job; she quickly realized, though, how much she enjoyed the work, and that she had a knack for it.  She considered, for the first time, that her career may lie not in the field of medicine, but in the world of education.  She was still interested in furthering her education, and she wanted to engage in the research end of teaching in addition to the practical side.

In 2001, Sara entered Temple as a graduate assistant and academic intern in the Student Teaching Center.  In short order, she earned her M.Ed. in elementary education and educational psychology and in 2008 she completed her Ph.D. in educational psychology.  Her time at Temple was, she says, invaluable.  Not only did she make many contacts with area schools, which helped her land her Philadelphia teaching job, but the work she did at Temple – advising students and placing them in their student teaching positions – prepared her for the work she’d eventually do at Rutgers-Camden.

It was while Sara was teaching in Philly that she was offered the position at Rutgers-Camden.  While excited for the challenge, Sara remembers that “I went from four-year-olds to college students.  It was an extreme jump.”  Part of Sara’s new job was to teach the student teaching seminar, and she recalls how nervous she was to teach adults.  Despite her initial hesitation, she loves teaching college students. “I really like the range of students we have here – age, background, ability.  I like how it’s not just 19-year-olds – there are recent high school graduates alongside grandmothers.  It adds so much to the class because everyone has such different experiences and they can share what they’ve gone through.  It adds a great perspective.”

Once the Teacher Preparation Program became IEE, the program’s goals expanded considerably.  Now, not only do they certify students to teach, but they incorporate both research and professional development as part of their strategic plan.  In addition to serving the undergraduate student population, they are also now starting their first-ever graduate programs. As IEE, they received a Woodrow Wilson Foundation Grant, which allowed them to create a graduate program which will prepare people with science and math backgrounds to become teachers.  This program, whose first students will enroll in Fall 2014, is a dual venture with Rowan University; Rowan will prepare the math teachers, while Rutgers-Camden will prepare the science teachers.  The program is intensive and will require its cohort of five students to spend twelve months in a high school classroom in either Camden or Pemberton.  After the completion of the program, these science professionals will have learned important, practical techniques like classroom management, something which requires hands-on experience.  Students in this program will keep benefiting from their Rutgers-Camden education even after their graduation; the grant covers continued mentoring of these new teachers.

IEE is also supporting the new master of art in teaching Spanish graduate program, which has its first students taking classes this spring.  Students in this program will learn their Spanish content from faculty in the Department of Foreign Languages, and IEE will assist with the certification process.

Clearly, IEE has experienced a tremendous growth spurt and is continuing to develop, thanks greatly to the efforts of people like Sara.