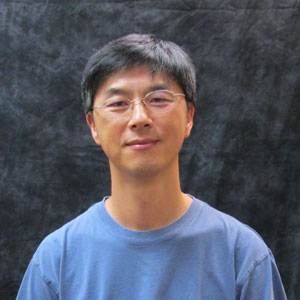 When Dr. Kwangwon Lee was deciding on a career, he knew he wanted his life’s work to be in service to God and others.  He discovered his career calling in research and teaching when learning about light regulation on organisms and how it affects fungi.  Studying the fungal pathogen that causes disease on plants would allow Kwangwon to have a positive effect on harvests and the population’s food supply.  The dedicated scholar pursued his interest, earning his bachelor’s degree at the University of Suwon in South Korea before continuing his education in the United States.  After earning his Ph.D. at Texas A&M University, Kwangwon began a stint at Dartmouth Medical School as a postdoctoral researcher in the Department of Biochemistry/Genetics.  In 2003, Kwangwon joined the faculty at Cornell University as an assistant professor in their Department of Plant Pathology and Plant-Microbe Biology.

Kwangwon was drawn to Rutgers-Camden because of its new Center for Computational and Integrative Biology.  The center advocates inter-disciplinary collaboration – leading scholars from the fields of biology, chemistry, computer science, mathematics, and physics work together toward a common goal of studying biological systems.  Kwangwon knew several of the professors already associated with the center, and was interested in the “sense of community” the center, and the campus, offered.

Kwangwon was offered an assistant professorship at Rutgers-Camden in 2009, and he made the transition to our campus.  In 2013, he became an associate professor.  In addition to his duties with the department of biology and the Center for Computational and Integrative Biology, he serves as a member of the microbiology doctoral program at Rutgers-New Brunswick and an adjunct faculty member for the University of Medicine and Dentistry of New Jersey.

When he arrived on campus, Kwangwon was impressed by the “top-level students” that were in his classes and their “genuine enthusiasm to be educated.”  He was glad to have the chance to offer these bright, talented students the opportunity to conduct research with him in his lab – to offer them “the chance to become real scientists,” says Kwangwon.  Just last summer, Kwangwon was able to employee eight undergraduate students to work in the lab, allowing them to engage in on-going National Science Foundation-supported research without worrying about finding a summer job to help pay their tuition and school fees.  Aside from the financial aspect, Kwangwon says this experience let “the undergraduate students learn how real research is designed and executed.  By the time they leave the lab, they become fellow researchers.”

It is through his work with students in the laboratory that Kwangwon discovered his passion for teaching.  While he knows the benefit of lecturing, he also thinks of exercises that fully engage the students, focusing on critical thinking and enabling them become experts in the topics they are studying.  One such activity is his annual class debate for his Circadian Rhythms class.  The class is divided in half, and each side must debate a point on a controversial topic in the field of circadian rhythms.  In order to argue their side, the student must totally engage with the material – a learning experience that Kwangwon feels has much more impact than simply reading a chapter in a textbook.  In his other class, General Microbiology, students study diverse microbiology-related topics of their choice during the spring semester, and present their findings to their friends and familiar at the end of the semester.  Truly, Kwangwon believes in active learning.

Kwangwon says “I find it very rewarding to help students who are pursuing their goals.”  His students, many of whom who have chosen to earn advanced degrees in the field of biology, are sure to be glad of Kwangwon’s knowledge, dedication, and mentorship.