Rutgers–Camden is set to host the exhibit April 11 – 19, 2022.
The exhibition will include the creation of the toe tag map (example shown below), as well as
talks and a documentary screening.
This is a participatory art exhibit, see more information below. To book a time slot to participate in writing toe tags for the map, please go to  rucamdenht94.youcanbook.me/ or click the “book now” button 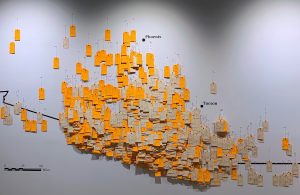 Hostile Terrain 94 is a participatory exhibition created by the Undocumented Migration Project, a non-profit organization that focuses on the social process of immigration and raises awareness through research, education, and outreach.

The exhibit is composed of approximately 3,400 handwritten toe tags that represent migrants who have died trying to cross the Sonoran Desert from the mid-1990s to 2020. These tags are geolocated on a wall map of the Arizona—Mexico border, showing the exact locations where human remains were found. The physical act of writing out the names and information for the dead invites participants to reflect, witness and stand in solidarity with those who have lost their lives in search of a better one. This exhibit is taking place at over 120 institutions across 6 continents with the intention to raise awareness about the humanitarian crisis at America’s southern border and to engage with communities around the world in conversations about migration.

In 1994, the United States Border Patrol launched the immigration enforcement strategy known as “Prevention Through Deterrence” (PTD). With heightened security measures at urban points of entry, undocumented migrants were forced to traverse extremely treacherous environments, land dubbed as “Hostile Terrain” by U.S. Border Patrol. PTD failed to deter border crossers. Instead, more than six million people have attempted to migrate through the Sonoran Desert of Southern Arizona since the 1990s. By using this tactic, the U.S. government has attempted to shift the blame onto the harsh environment, weaponizing the desert as a natural killing field. As a result of this policy, more than 3,400 people have died, largely from dehydration and hyperthermia, while attempting the journey through Arizona. PTD is still the primary border enforcement strategy being used on the U.S.—Mexico border today.

Migrant death at the border is both systemic and systematic. Policies such as PTD, along with the use of detention centers and obstacles in attaining asylum, have created a system that has traumatized thousands of people in the name of immigration control.


Events Surrounding The Creation of the Map

The construction of HT94 will include many students and volunteers from the Rutgers – Camden community, who participate in tag-filling sessions. During these sessions, they write the details of each of the dead on a toe tag and then publicly place the tags on the map– in the exact location where each individual’s remains were found. Some tags also contain QR codes that link to content related to migrant stories and visuals connected to immigration, including a virtual exhibition that can be accessed via cellphone.

Tag writing sessions are posted for sign up to give people a chance to be part of the process of creating the map. This will take place in the main lounge of the campus center.
Alongside the creation of the map, our campus will organize the following related events on campus:

Efforts to identify the remains of migrants who have died depend on the work of forensic anthropologists and forensic archaeologists.  This talk will highlight their work and will focus on the methods used to determine the biological profiles of recovered human remains.  In addition, we will discuss how forensic science contributes to the investigation of human rights abuses both in the USA and abroad.

Around half the refugees in the world are minors. Of asylum seekers at the southern US border, about 100,000 a year are children fleeing extreme poverty or violence, whether unaccompanied or with their families.
This talk discusses what rights such children have in both US and international law
and how well the US government is meeting these rights.

There will also be an event with students at LEAP as well as a community event at Camden FireWorks with Jason De León on the 18th. These will be advertised to the respective communities.

Below is drone footage of the Sonoran Desert, the area that is represented on most of the map.
It should give you a sense of how unwelcoming this terrain is.

Hostile Terrain 94 (HT94) is a participatory art project sponsored and organized by the Undocumented Migration Project (UMP), a non-profit research-art-education-media collective, directed by anthropologist Jason De León. The exhibition is composed of ~3,400 handwritten toe tags that represent migrants who have died trying to cross the Sonoran Desert of Arizona between the mid-1990s and 2020. These tags are geolocated on a wall map of the desert showing the exact locations where remains were found. This installation is taking place at over 120 institutions, both nationally and globally, between 2020 and 2022.