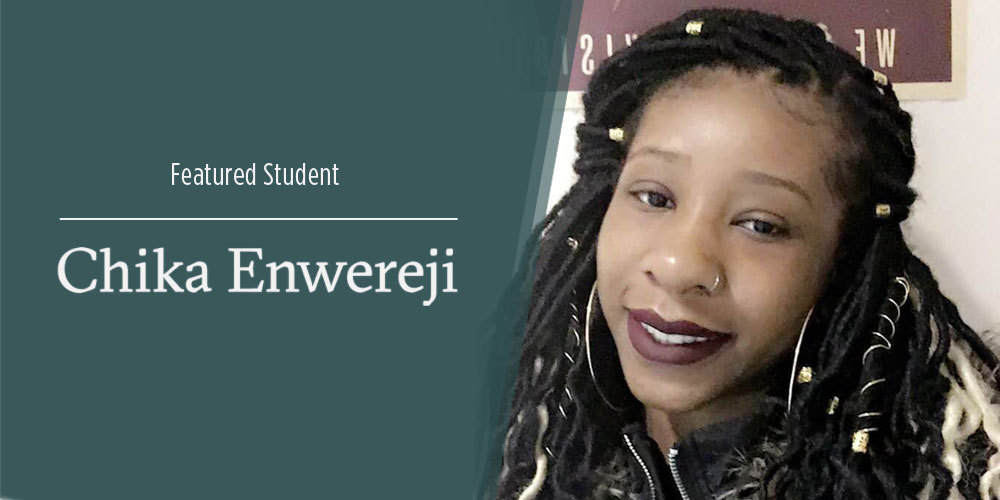 Chika Enwereji was born and raised in the heart of the nation’s political environment, Washington, D.C., a factor that has inspired her career path and influenced her declaring a political science major. “Riding the train everyday you’ll always see professional men and women with their suits on ready to go to office, and that kind of appealed to me” she revealed.

When it came time for Chika to choose a college, she decided to step away from the center of politics and what was familiar. She chose Rutgers University–Camden due to the example set by her older sister, a Rutgers alumnae.

“I like to follow in my older brothers’ and sister’s footsteps,” said Chika, who is the youngest of her four siblings. “When I was thirteen, she graduated so I was able to see the campus. As a middle-schooler it appealed to me and I liked it.”

Fast forward eight years later and she’s about to graduate from the Honors College of the same school she had visited as a teenager. During her time here, she has been able to secure an internship with Assemblywoman Carol Murphy, in Cinnaminson, New Jersey.

“I drafted policy memos. I’ve visited elementary schools to discuss the legislative process. It’s given me a lot of insight and it’s also been a lot of fun,” she recounted about her internship.

As she nears graduation, she’s in awe about her experience at this campus, including all that she has accomplished. With the coursework from the honors program, taking part in an internship, working at CVS, and developing research for her thesis, this senior is juggling a lot. “I’m surprised I’m not bald right now with all of the stress I’ve gone through,” she said with a laugh. “I’m in the honors program for political science so I have to do my own research paper.”

Chika’s thesis is titled Evaluating the Government’s Approach in Combating the Crack-Cocaine Epidemic vs. the Opioid Crisis. Chika decided to research this issue as the connection seemed unfair and demeaning to her. “I am arguing that the government’s approach in combating the crack-cocaine epidemic varied when responding to the opioid crisis due to how lenient the government is handling the opioid epidemic,” explained the political science undergraduate. “In the War against Drugs, especially here crack-cocaine, the government practiced the deterrence theory, [or] enacting strict laws in order to deter people from committing crimes. On the other hand, when it came to combating the opioid crisis, the government advocated for rehabilitation centers and drug programs. Although I understand that the government was trying to prevent the spread of diseases that can derive from engaging in such drugs, it kind of appeared as though they were enabling the drug users instead of deterring them from using.”

Developing her thesis was quite a lengthy process. “Finding this data was challenging due to how old the data was,” Enwereji revealed. “I had to find [the] data of drug arrests for three different counties in Maryland from the 1990s all the way up until 2000. Not to mention, I also had to determine the demographic of these three counties within the same time frame in order to address racial-profiling and systemic racism within police departments.” In the end, she was able to acquire the information she needed from the resources and staff, specifically Research Librarian Julie Still, at the Paul Robeson Library here at Rutgers–Camden.

As Chika’s time on campus comes to an end, she plans to take a gap year upon graduation, allowing her time to gain work experience in her field and study for the LSATs. In particular, Chika is thankful for the friends she made during her time at Rutgers University–Camden.

“They’ve taken me around and I’ve gotten familiar with Jersey. They’ve helped me a lot,” the D.C. native acknowledged. “I wouldn’t feel as comfortable down here without them. They made it feel like home.”