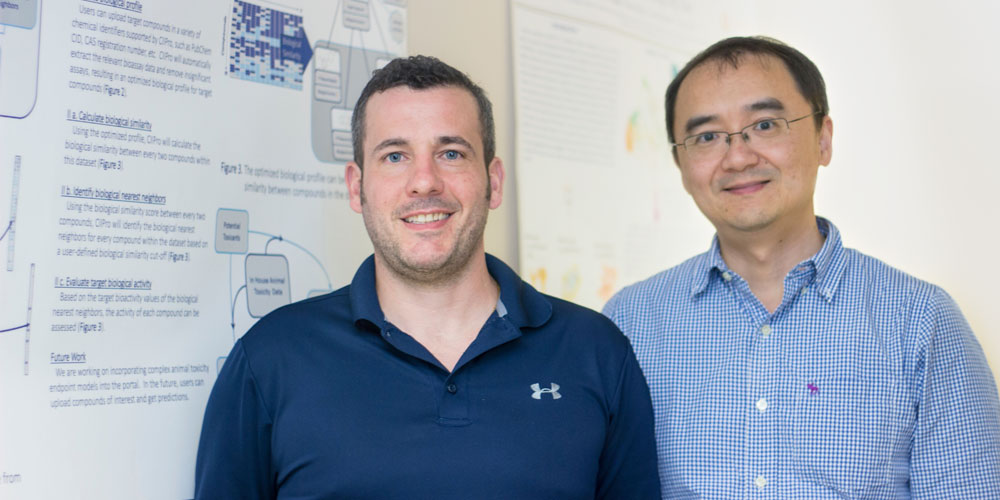 For the second year in a row, research from the Rutgers–Camden Center for Computational and Integrative Biology (CCIB) is honored at a national conference. In September, the 7th annual meeting of the American Society for Cellular and Computational Toxicology (ASCCT) was held at the National Institutes of Health in Bethesda, Maryland. This meeting brings together researchers from academia, government, and industry to discuss possible alternatives to animal toxicity testing. This year, a CCIB doctoral student, Daniel Russo, was given the Tox21 Student Award for his work developing computational models that examine the effect environmental chemicals are having on the human body. Last year, Dr. Wenyi Wang, who was also a CCIB doctoral student from the same research group as Russo, received this award for a project that simulates nanomaterials virtually within a computer. 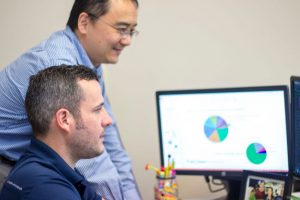 While Russo’s current research focuses on developing computational models for predicting chemical toxicity, it’s a far leap from where his journey at Rutgers–Camden started; which began with a passion for marine biology and a fascination with sharks. “It started with a big interest that eventually got smaller and smaller,” Russo explained. “Starting in undergraduate I got really interested in marine biology, specifically the mechanisms involved in shark navigation and feeding and how these signals are transduced to the brain. The effect external stimuli have on the body fascinated me and eventually led to an interest on how drugs and environmental chemicals are interacting with different molecules and pathways in us humans. And that’s how I wound up with Dr. Hao Zhu [Associate Professor of Chemistry] and his research lab. It started with sharks and now it’s about chemicals and proteins.”

The CCIB program is known for its “interdisciplinary nature,” allowing students to perform research at the intersection of math, computer science, physics, chemistry and biology. “The superior part of CCIB is that we can try to combine the frontier of sciences together. It’s not like if you study biology you only study biology,” Dr. Zhu says. “Every discipline doesn’t really exist by itself, you can’t really do biology without doing chemistry,” Russo reiterated. “That’s just the way science should be done, through an interdisciplinary framework.”

The research possibilities and tools that this program gives its participants access to is what Dr. Zhu and other faculty believe gives these students an edge in their fields when it comes to getting a job after graduation.

“If you really want to be outstanding, you need to be unique. I believe that this program will make you look quite special. You are graduating with a degree as an expert in different kinds of fields,” Dr. Zhu says. Dr. Zhu also stressed that he knew Russo would be a good candidate for the CCIB program, based on Russo’s work prior to enrolling in the doctoral program.

Russo’s Ph.D. research involves machine learning, a type of artificial intelligence that teaches computers to do human-like tasks such as drive cars or identify faces in photographs. Russo’s research, however, involves enabling computers to recognize whether a chemical will be toxic or a potentially new drug. It is this work that Russo presented in the ASCCT meeting, competing alongside students from elite universities such as Harvard, Stanford and Vanderbilt.

When Russo found out he would be receiving the Tox21 Student Award, he was shocked.  “It had me floored a bit because I didn’t really expect to get it,” the student honestly confessed.  “It seemed unlikely they would give it to the same lab twice.  Additionally, there were students from Harvard and Vanderbilt doing really amazing work, so I was kind of taken aback when it was announced but I was very much honored. Wenyi [Wang]’s work is amazing too, so to be put in the same category as her is also quite the distinction.”

It is a significant accomplishment for Rutgers–Camden students, who came from the same research group, to win this competition two years in a row. It is a marker that these students and this lab can successfully compete against students from such elite schools and speaks to the quality of research being done in the CCIB program.

“At this program we try to educate the student not just for South Jersey but for the nation, so that they can work anywhere,” said Dr. Zhu.

After publishing 12 research papers, a book chapter, and giving multiple presentations at national conferences in the past four years, Russo nears graduation and recounts on how grateful he is for having been mentored by Dr. Zhu. Dr. Zhu embodies qualities such as motivation, work ethic, and overall positive mentality, and these traits are what make him so inspirational to his students like Russo.

“You heard him say ‘never compare yourself locally, always globally,’ but it’s not because he wants us to set these unrealistic bars. He knows that you can do it and expects that from you,” says Russo. “That’s great motivation because once we get there, we know no one is going to have our back like Dr. Zhu, who fights for us and promotes us.”

The award-winning research will be exposed to an international audience through a special webinar hosted by the ASCCT. The webinar is available to the public and will be held on February 21st at 10:00 AM.  Details regarding the webinar can be found on the ASCCT website.