Alesha Figueroa-Falcon is a person that cannot be stopped. She faced a lot of hardships growing up, but that did not stop her from tackling AP English, AP Biology, Honors Trigonometry, and Honors Physics in high school. She has won awards for her efforts, such as the Overcoming Adversity Award, given to her by the Camden City Board of Education; she was elected Homecoming Queen; and she was selected as Camden County Freeholders Best of Class, as well as Best Overall Student.

Now that she is in college, she has not slowed down, but accelerated. She volunteers for the Camden Companions Animal Rescue, is an active member of Biology Club and TRIO Student Support Services, and she currently serves as the Gender Studies Organization club secretary. 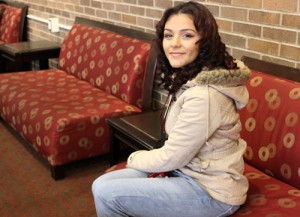 As a first-year student at Rutgers University–Camden studying biology, she originally thought of attending Rutgers–New Brunswick, and also considered Richard Stockton College of New Jersey, “but it was Rutgers–Camden all along,” she says, explaining that Camden is her home, and she enjoys that she could still get the full college experience of living on campus while being so close to her family and friends, even visiting her grandmother on the weekends. She also likes the cozy sense of community in Camden, and how no one needs to feel out of place on the small campus. “It makes me feel comfortable. Everyone knows each other.”

She also wants to put a rest to Camden’s bad rap. “I’ve met people that think if you’re from Camden, you’re stupid,” she says. “It’s obviously not true.” Alesha uses this anger towards ignorance as fuel to do better. She says that she also stays motivated and positive by remembering her family and friends, who are all very proud of her and how far she has come. Her grandmother dropped out of college and some of her family members never made it past high school. “So, I look back at the neighborhood, and I know where I could end up.” She says that she knows of two students from high school that have already died in the streets, and she does not want that for herself. “It’s a lot of pressure,” but she does not give up. “Difficulties make us stronger. Give us a will to go on.”

However, staying positive certainly is not always easy. “I had so much anxiety my first semester,” Alesha admits. She was taking six classes plus a lab to get all the requirements out of the way. This is the second semester of her first year, and she has slimmed her schedule down to only six classes. She is studying biology, but she also loves, more specifically, marine biology. She plans on volunteering or acquiring an internship at the Adventure Aquarium soon, and she adds that if all goes well, she would like to finish her undergraduate degree, obtain a master’s degree and a Ph.D., and own her own aquarium. “It’s really hard, but biology is what I love.” Her love of biology stems from her love of animals, she adds. “Some of my favorite things to do are to play with animals or to walk my dog.”

Alesha adds that Professor Paulson, who is an assistant instructor in the biology department, aided her in gaining more confidence in school. “I was concerned I wasn’t doing well, but when I talked to her, she told me I was doing really great, so I could relax a little. I wasn’t expecting to have a relationship with any of my professors, really, so I was surprised with how comfortable I was talking to them.” Alesha also took advantage of the tutoring sessions at the Learning Resource Center and an Online Recitation Class. “The online class was difficult, but it brought up my grade on one of my exams. It was very worth it.” She explains that this helped her gain more confidence and pushed her to work harder so she could do it on her own. She adds, “And I definitely recommend it.”

Alesha is working hard at defying the odds and has already come a long way. With her talents and perseverance, she will surely go far in Rutgers–Camden and beyond—and the rest of us will have fun watching her make her dreams come true.