The university remains open. The university, all clinics, libraries, and research operations remain open. All in-person or hybrid events scheduled through January 31, 2022, should be moved to entirely virtual platforms. Supervisors are asked to allow and encourage all employees who can telecommute to please do so until January 31, 2022. Where possible, in-person classes will temporarily convert to remote classes through Sunday, January 30, 2022.
Latest COVID-19 Info
Home » News » Faculty News » We R Arts and Sciences: Dr. Benedetto Piccoli

As a young boy growing up in Italy, Benedetto Piccoli was fascinated by mathematics.  As he got older, his interest in math never waned, and when he entered the University of Padua for his bachelor’s degree, his appreciation and passion for the subject strengthened as he began to learn about “modern math,” which is not linked to numbers but to theoretical ideas.  He ultimately earned his Ph.D. in mathematics, and then become a permanent researcher for the International School for Advanced Studies (SISSA).  It was during this period that Dr. Piccoli had his first exposure to Rutgers University: from September 1995 – March 1996, he was visiting professor and researcher at the New Brunswick campus, an experience he calls “very positive” and helped influence his decision to ultimately return to Rutgers as the Camden campus’ first endowed chair.

Joseph and Loretta Lopez (both CCAS ’64), who met while students at Rutgers–Camden, contributed a multimillion dollar gift to create the Joseph and Loretta Lopez Endowed Professorship in Mathematics in Honor of Professor Leonard Bidwell.  At the time of the announcement of this new position, Dr. Piccoli was looking at opportunities in other countries, but was particularly interested in coming back to the United States.  The endowed professorship, which is a prestigious honor that enhances a faculty member’s ability to do research, attracted his attention.  Dr. Piccoli was selected for the position, and was formally installed as the first endowed chair in November 2009.  He calls the career move “a life achievement,” and calls the encouragement and support he received when he arrived on campus “a great, positive surprise.”  He and the Lopez family have become friendly over the years; Mr. and Mrs. Lopez traveled to Rome recently, and Dr. Piccoli served as their tour guide.

The new Center of C 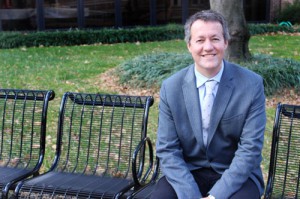 omputational and Integrative Biology (CCIB) was also something that “extremely interested” Dr. Piccoli.  The idea to bring math to other disciplines and real-world applications that impact people’s lives was a challenge he found exciting.  “Scientists in different fields working together is so important, but rare,” Dr. Piccoli says.  CCIB helps to bridge that gap.

Dr. Piccoli’s interest in CCIB’s interdisciplinary spirit plays a role in his own research, as well.  He recently published the book Multiscale Modeling of Pedestrian Dynamics, which, like much of his research, centers on the science of movement.  This particular project focused on human walking.  Along with researchers from areas such as biology, psychology, and engineering, Dr. Piccoli examined how people walk when an obstacle, such as a cone, is placed before them.  Dr. Piccoli proposed a model and algorithm, which led to him, Dr. Mary Bravo, Associate Professor of Psychology, and Emily Leibowitz (CCAS ’12) conducting three different experiments, which, interestingly, had three different results.  The first three chapters of Multiscale Modeling are “formula-free” and written so that anyone, regardless of their academic background, can understand and enjoy.

Another exciting project that Dr. Piccoli, along with Dr. William Saidel, Associate Professor of Biology, is mentoring is the “octocopter” project of Scott Davis (CCAS ’15), who is currently a student in the graduate biology program.    The octocopter is a flying drone that is equipped with cameras that take pictures of flocks of birds, particularly starlings, which fly together in elaborate, seemingly random patterns, in perfect harmony, a process called “murmuration.”  There is a lack of data on murmuration, so this is a great opportunity for Dr. Piccoli and his colleagues to contribute to the research on this phenomenon.

Clearly dedicated to his research, Dr. Piccoli also savors his time in the classroom with his students.  “I want to impart my passion on to my students,” he says.  He does this through highly interactive classes, where the students are constantly engaged in the material.  Dr. Piccoli’s enthusiasm and energy have been well-received by his students, because in 2013 he received the Chancellor’s Award for Teaching Excellence, an award Dr. Piccoli was grateful to receive, in part because his students volunteered to write letters on his behalf, supporting his nomination for the award.  “It meant a lot to me,” he says simply.

While Dr. Piccoli has only been at Rutgers–Camden for five years, it’s certain that he has made his mark on this campus, from being the first endowed chair, to receiving the Chancellor’s Award for Teaching Excellence, to now overseeing the Center for Computational and Integrative Biology.  He’s an integral part of our campus, and we couldn’t be more delighted that he’s found a home away from home with us at Rutgers–Camden.

Rank: Joseph and Loretta Lopez Endowed Chair Professor of Mathematics and Director of the Center for Computational and Integrative Biology (CCIB)