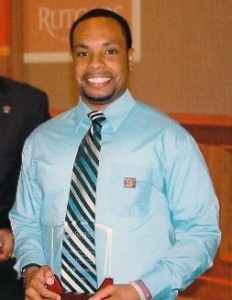 Joseph R. Harris III is proud to receive the 2013-2014 Hazel Vera Dean Fellowship.  The Hazel Vera Dean Fellowship is awarded annually to graduate students on the basis of both academic merit and financial need.  The South Jersey native obtains a Bachelor’s of Arts with honors in Economics and a minor in Finance from Rutgers–Camden.  He is currently pursuing a Master in Public Policy and Administration with a concentration in Public Management at Rutgers–Camden.

Joseph’s journey to attend college was filled with many obstacles.  He began his college career during America’s roughest economic climate since the Great Depression.  This influenced his decision to enroll locally at Rutgers–Camden for a bachelor’s degree and it also sparked his interest in economics and public policy.  He was determined to further study what caused this global meltdown and was eager to evaluate different economic public policies to prevent it from reoccurring.

While an undergraduate student, Joseph excelled in all of his economics courses and was offered a research assistant position in the Economics Department with Dr. Tetsuji Yamada. This gave him the opportunity to gain research experience in health economic issues.  His excellent knowledge in economics also allowed him to be offered an internship position at the Federal Reserve Bank of Philadelphia.  There he conducts economic and policy research for the Partnership for Progress program, a Federal Reserve System program to help promote and preserve minority-owned depository institutions. One of his responsibilities is to collect quarterly and yearly data from minority-owned depositary institutions and compare factors that contribute to their overall performance in the economy.  After working several years with the Federal Reserve Bank, Joseph found interest in monetary policy and business regulations as a possible career choice.  It was then that he applied to the BA/MPA dual-degree program.

Once accepted into the MPA program, Joseph began to further his knowledge in conducting economic policy for monetary and business regulations.  In addition to his internship at the Federal Reserve Bank and enrollment in the MPA program, Joseph works with Rutgers Camden’s Senator Walter Rand Institute for Public Affairs (WRI) as a Project Assistant.  There he is responsible for conducting economic research issues that impact the Southern New Jersey region, such as labor market trends in the region.  He presents his result findings to meetings throughout the regions consisting of public administrators, elected officials, non-profit organizations, and community leaders in attendance.

Joseph intends to graduate from the MPA program in December 2014 and he enjoyed spending his entire college career at Rutgers–Camden.  He feels grateful that the university has given him an opportunity to gain knowledge in his field of interest.  As his college career is near complete, he hopes to utilize his education and experience to make a difference in the world.