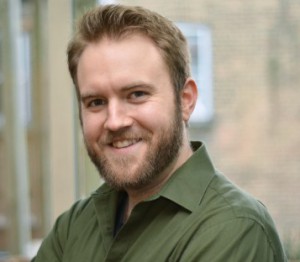 Every day, households all over the country tune in to Sesame Street.  To get the chance to work for an institution like this is a dream for many; for the very talented Andy Zazzera, working for Sesame Street became a reality before he even graduated from Rutgers-Camden with a bachelor’s degree in art.

A Rutgers-Camden alumnus and friend of Andy’s, Dean Jones, was working for a company called Speakeasy FX, which was trying to get the contract to work on a computer animated segment called “Abby’s Flying Fairy School” for Sesame Street.  The company’s designer was so busy with other projects that Dean called Andy, who was a senior at Rutgers-Camden and in the middle of working on his thesis project, to see if he could do some character designs for the segment.  Andy agreed, and the rest is history.

Once Andy was hired by Speakeasy FX, work on Abby’s Flying Fairy School began.  The project was intense, as they had to create 26 eight minute computer animated Muppet segments that would air within the one hour Sesame Street episodes.  Speakeasy FX needed more assistance with the project, so Andy reached out to his friends that were also in Rutgers-Camden’s computer animation program.  Ultimately, Rutgers-Camden alumni made up half of the artist pool on the project.  “The company’s owner was amazed at how well we were able to take a project and just run with it,” Andy remembers.

The team had to create a whole new world featured around the Muppet Abby and her group of friends, while highlighting critical thinking and problem solving.  They also aimed to entertain parents, as well.  “We got to add visual gags for everything from Michael Jackson to Voltron to a donkey dancing like MC Hammer.  I can’t imagine kicking off my career with a project any more fun than that!” Andy says.

In 2011, Speakeasy FX closed.  Andy again managed to thrive, however, and was hired by Sarofsky, a Chicago-based business that had subcontracted a lot of computer graphic (CG) work to Speakeasy FX.  Andy had worked on many of Sarofsky’s projects already, including the title sequence for the NBC comedy Community, so when the company decided to open their own CG department, they tapped Andy to run it.

Andy’s been at Sarofsky for nearly two years, and during his time there he’s had the opportunity to work on commercials and TV show title work for NBC’s Animal Practice.  One of his favorite projects to work on was the Richard Robbins documentary Girl Rising.  The film tells the story of nine different girls, all of whom triumphed over hardship.  Each story was split into its own segment, and so Andy’s company worked on the one to two minute interstitials between the stories, in which they needed to visually represent facts and statistics about the problems women face world-wide.  For Andy, it was one of the most rewarding projects he’s worked on.

Andy’s entry into the world of computer animation started at Rutgers-Camden in 2004, when he began his freshman year.  Andy was drawn to Rutgers-Camden because of the stellar reputation of the art program and because the school was only fifteen minutes from his home.  Rutgers-Camden also provided him with a generous scholarship, so to Andy, the decision to attend Rutgers-Camden was, in his words, “a no-brainer.”

One of the things Andy most enjoyed about his time here at Rutgers-Camden was being a member of the Honors College.  He praises the Honors College seminars, and cites the class Vision and Art, taught by Dr. Mary Bravo, Associate Professor of Psychology, as being a particular favorite.  “It was incredibly fascinating, and explored concepts that play into what I do for a living much more frequently than I would have ever guessed.”

Getting his degree at Rutgers-Camden proved to be a life-changing decision for Andy.  Not only did he make invaluable connections with the faculty and his fellow classmates, but the animation program taught him important skills and lessons that allowed him to rise quickly to the top of his field.  He appreciates the hard work and long hours he put in as an undergraduate, and acknowledges that the four years he spent at Rutgers-Camden helped him shape a very exciting, very successful career.

Camden College of Arts and Sciences Graduation Date: May 2008