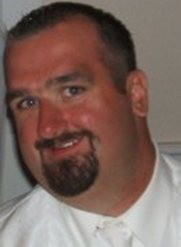 While Peter Fazzino, Jr., may be relatively new to the Camden campus, he can claim sixteen years as a Rutgers employee.  Peter, who currently serves as the secretary for the Department of Chemistry and the Center for Computational and Integrative Biology, began his career with Rutgers as a secretary in Cook College’s Office of the Executive Dean in 1997.  The position was initially a temp job, but soon blossomed into a full-time role.  From this job, Peter transferred to Douglass College, working in offices as varied as Residence Life and Community and Judicial Affairs.

Peter greatly enjoyed his work on the Cook/Douglass campus, but his grueling four hour round-trip commute took its toll.  He looked for work closer to his Galloway home, and found it at Rutgers-Camden.  In August 2011, he became the principal secretary for the Rutgers-Camden Learning Resource Center.  Though he enjoyed his work at the center and liked seeing how the students progressed in their studies, he left this position in March 2012 for another Rutgers position.  He became an administrative assistant for the Rutgers Expanded Food and Nutrition Education Program’s (EFNEP) Cumberland County Supplemental Nutrition Assistance Program Education (Snap-Ed) Office, which educated children and adults in Cumberland County about eating well on a tight budget.  Unfortunately, Peter only worked in the office for a year before his position was eliminated.

Peter’s strong work ethic and can-do attitude helped him secure a position back at Rutgers-Camden in July 2013.  In a sense, it was a kind of homecoming.  “I was welcomed back with open arms,” Peter says.  He is full of praise for the Camden campus’ personable atmosphere, happy again to be part of the camaraderie and the “Rutgers-Camden family” that he missed since leaving his position in the learning center.

Though he had never worked for an academic department before, Peter quickly adapted to his new role, working with faculty members, collaborating with a different set of offices, becoming familiar with lab equipment and processes, and editing the course catalog, among many other tasks.  One of the tasks that Peter greatly enjoys is assisting with the editing of the chemistry department’s website, as he has some experience with web design.  While working full-time on the Douglass campus, Peter earned his networking certificate from the Chubb Institute in 2001; during his time in the program he learned how to build infrastructures and hardwire a building.  Since then, Peter has built and maintained websites, and even designed graphics, for his friends who own their own businesses.

While Peter enjoys web design, his greatest passion is umpiring.   When Peter was young, his father was the head of an instructional baseball league.  The teenager his father hired to umpire never showed up, so Peter, who was then only ten years old, filled in.  He showed great talent in the role, and shortly after his first impromptu umpiring gig the league president asked him if he’d be interested in umpiring regularly.  Peter was hooked, and in 1994 joined the Mickey Sedlak Chapter of the New Jersey State Federation of Umpires, Inc.  Since then, Peter has served as an executive board member, a training coordinator, and an officer of this organization.  In 2006, Peter joined a college chapter, and he umpired his first college game right here on the Rutgers-Camden campus, and the home team won!

One of Peter’s most memorable umpiring experiences was serving as a professional baseball umpire with the Canadian American League from 2006-2008.  This independent minor league organization, which counts many former minor league and college baseball players as members of its rosters, was playing in the New Jersey region, and needed a local umpire to assist with some games.  “I jumped at the opportunity,” Peter recalls.  “It was a very exciting experience.”    Peter has also had the opportunity to work the New Jersey State Interscholastic Athletic Association State Baseball Championship in 2009.

Peter’s next goal is to earn his bachelor’s degree.  His wife, Kelly, recently went back to school, and her return to the college classroom motivated him to take the steps necessary to complete his degree, which he began as a non-matriculated student on the Cook campus in 1998.  Peter is particularly interested in project management, and would love to earn a degree in this field by the time his daughter, who recently entered high school, finishes her bachelor’s degree.

Clearly, Peter is a motivated individual who relishes new opportunities, but also appreciates the past.  Rutgers-Camden is proud to be part of Peter’s past and present, and looks forward to working with him on new and exciting projects in the future.

Position: Secretary of the Department of Chemistry and the Center for Computational and Integrative Biology