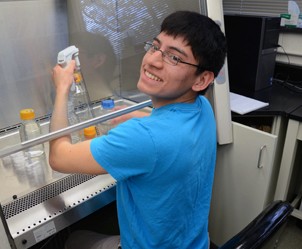 Ryan Pachucki is a student who knows what he wants.  The biology major has always enjoyed science, and knew that research experience would be the key to his success.  “The ability to do research at the undergraduate-level is the main reason I came to Rutgers-Camden [after earning an associate’s degree at Burlington County College],” he says.  Over this past summer, Ryan, along with other students, worked in Dr. Kwangwon Lee’s lab, investigating the circadian rhythms of Neurospora.  Circadian rhythms are biological rhythms of a period of 24 hours. Ryan’s duty was to extract DNA from 400 strains and send it out for sequencing. The phenotypes are currently being investigated. The sequenced data will be compared to the phenotype. This comparison will enhance the understanding of circadian rhythms.

Ryan was inspired by Dr. Ruth Sporer’s Immunology and Serology class to seek an internship in clinical research at Thomas Jefferson University Hospital in Philadelphia.  He and the other interns worked in the emergency room and interviewed patients about their experiences with tobacco.  Other clinical studies were completed during this internship.  The overall goal was to create awareness among patients about potential health risks.  In turn, these interviews would help people avoid visiting the emergency room.  The results of these studies will be analyzed at a later date.  The internship enabled Ryan to get critical clinical experience, which will be a positive addition to his graduate school applications.  Ryan praised the Career Center for helping him to secure this internship, and said Rutgers-Camden’s proximity to Philadelphia was a key factor in making this opportunity possible.

When he’s not conducting research in the lab, Ryan is a member of the Asian Culture Club and also worked for the New Jersey Public Interest Research Group (NJPIRG).  Much of his work for NJPIRG was based in the community.  For example, every Monday members of NJPIRG would make more than 100 sandwiches on campus and send them to Cathedral Kitchen, a Camden soup kitchen.  He credits Dr. Sporer with encouraging him to get involved with his campus community.  “I like how Rutgers-Camden is so diverse, and how you can be involved in so many clubs,” Ryan says.  Despite his busy schedule, Ryan has maintained a high grade point average and has made the Dean’s List each semester he has been enrolled at Rutgers-Camden.

Ryan’s genuine passion for science and his strong work ethic are certain to carry him far in life.  The skills he polished, the research he conducted, and the lessons he learned here at Rutgers-Camden will pave the way to a very successful future for this determined scientist.

Expected Camden College of Arts and Sciences Graduation Date: May 2013