The university remains open. The university, all clinics, libraries, and research operations remain open. All in-person or hybrid events scheduled through January 31, 2022, should be moved to entirely virtual platforms. Supervisors are asked to allow and encourage all employees who can telecommute to please do so until January 31, 2022. Where possible, in-person classes will temporarily convert to remote classes through Sunday, January 30, 2022.
Latest COVID-19 Info
Home » News » News » We R Arts and Sciences: Richiena Brown 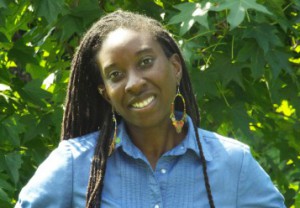 This January, as you are making (or breaking) your New Year’s resolution, public policy and administration graduate student Richiena C. Brown will be boarding a plane to South Africa, where she will be doing AIDS outreach work as part of her work with the Peace Corps.  When she first arrives she’ll receive three months of training, learning about the language and local culture, before she receives her official assignment.  Richiena will spend 27 months in South Africa; she’ll return to the States in time for her May 2016 graduation from the Graduate School-Camden.

Richiena returned to Philadelphia after she earned her master’s degree, and where she began to look for jobs that would fit her interests and skill set.  In 2005 she joined the organization CATCH, Inc., where she worked as an outpatient therapist and as a behavior health professional.  Richiena worked within a Philadelphia elementary school with children who had emotional, psychological, and behavior adjustment disorders.  She championed the idea of nurturing the children therapeutically, which, she explains, means “getting to know the kids, giving them freedom, letting them express themselves, and letting them know they are cared for.”  Despite her success with CATCH and her genuine love of the work, in 2007 Richiena left CATCH for an organization called Wordsworth, where she would work as a behavior specialist and mobile therapist.  Richiena’s work with Wordsworth allowed her to decide on her own hours and to travel to different locations.  With this position, Richiena visited the child’s home and worked directly with the child’s parents and guardians.  The work was difficult, but Richiena enjoyed the challenge.  “It gave me the opportunity to see another level of poverty and disenfranchisement first-hand,” she says.

After spending two years as a behavior specialist and mobile therapist for Wordsworth, Richiena became the clinical coordinator for the organization, a supervisory position.  One summer, one of the staff that she supervised traveled to Thailand and worked with former sex workers.  Her colleague’s experience renewed Richiena’s interest in the Peace Corps and she began to seek master’s programs which would allow her to join the Peace Corps as part of her degree requirements.

Richiena knew she would want to stay in the northeast, so it was with happiness that she learned about Rutgers-Camden’s public policy and administration program, and its International Public Service and Development (IPSD) track.  After spending a full year in the program, Richiena is full of praise for her accelerated program.  “I love the school atmosphere.  [Public policy and administration] is the best program, and it really inspires me to work hard,” she says.  In particular, she cites her fellow IPSD students and Dr. Marie Chevrier, Professor of Public Policy and Administration and Chair of the Department of Public Policy and Administration, and Dr. Lori Minnite, Associate Professor of Public Policy and Administration, as motivating figures.  “Dr. Chevrier is so experienced in international politics and shared her firsthand knowledge of negotiations.  Dr. Minnite introduced us to other perspectives that challenged traditional thoughts.  She really nurtured student learning,” Richiena says.  As for her fellow students, Richiena genuinely admires their accomplishments and cherishes their friendship.  “I feel so fortunate to be part of this group.”

Richiena completed her traditional coursework in Spring 2013, and took a semester off to concentrate on her work as a lead clinician and mobile therapist with Interac and Northeast Treatment Center before she leaves for South Africa in the new year.  Though she knows her time abroad will be an adjustment, she’s thrilled to go to South Africa to work with HIV and AIDS victims.  “Everyone should have this opportunity,” she says.  “It’s an opportunity to change the energy on the globe.”

After she earns her master’s degree in public administration, Richiena is interested in pursuing her Ph.D.  Her goal is to merge her clinical psychology background with her public policy and administration degree and work with social intervention programs, and eventually build an NGO from the ground up.  Richiena is also a fiction writer who earned an Honorable Mention from the A Room of Her Own Foundation, which supports women artists and writers, and she also plans to continue with her writing and hopes eventually to publish her work.  “The writing process keeps me even-keeled,” she says.  “I love to develop characters and set scenes.”

Richiena credits her brother, Rasheed, with keeping her inspired creatively and spiritually, and to a large extent, emboldening her to travel and live internationally.   “Rasheed has always been able to break free of the illusion of fear and live fully,” she says.  “He’s lived in Dubai and Bahrain generously creating art, living happily, and showing me what’s possible.”

Her dreams are bold, her energy is boundless, and her passion is palpable.  If her past work is any indication, South Africa and the world will absolutely benefit from Richiena’s dedication, spirit, and enthusiasm.