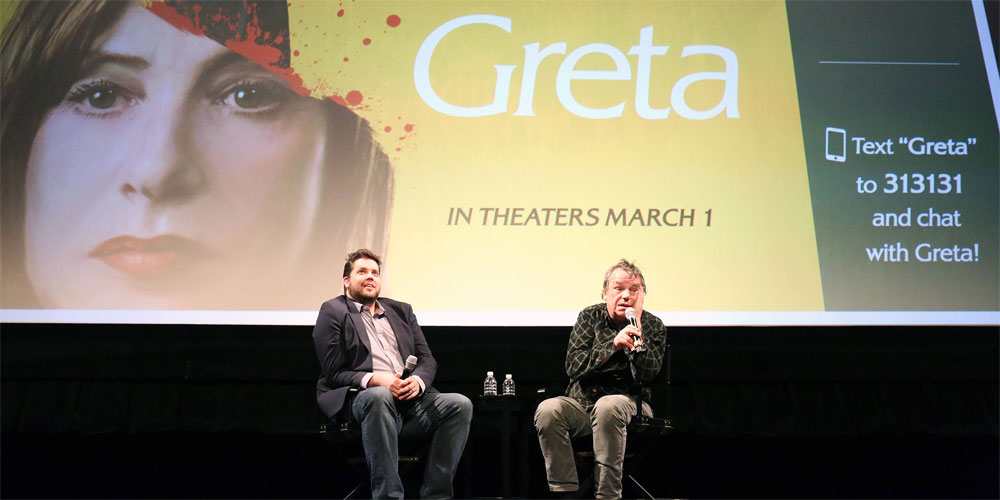 With the Oscars just broadcasted, movie fans are abuzz about what the Academy nailed and missed. This year, the horror film was noticeably absent – especially since the previous year’s ceremony granted accolades to the revisionist horror film Get Out (2017), with nominations for Best Picture, Best Actor (Daniel Kaluuya), Best Director (Jordan Peele), and Peele taking home the statuette for Best Original Screenplay. The “captive” horror film is part of a new cycle in horror, with Peele’s film preceded by M. Night Shyalaman’s Split (2016) and now including the Manhattan-set film Greta, in which the title character, played by famed French actress Isabelle Huppert (Elle, The Piano Teacher), draws a recent college graduate, Frances (Chloë Grace Moretz, The Miseducation of Cameron Post) into a possessive nightmare.

Matthew Sorrento’s class in the History of the Horror Film was thrilled to attend a preview screening of Greta at the Philadelphia Film Center (formerly the Prince Music Theater), 1412 Chestnut Street, on Thursday, May 21. As a special bonus, the film’s director, Neil Jordan (The Crying Game, Interview with a Vampire, The Brave One), was in attendance to introduce the film and do a post-screening Q and A. Below are a selection of the students’ reactions to the film and event.

“I am never excited to see movies anymore,” wrote Allison Mailley, a senior English major/linguistics minor. “Thursday night was an exception. I enjoyed the overall experience of being in such a wonderful theater and watching a film that didn’t have all the special effects and frills that so many people go absolutely bonkers for today.” Many students were taken in by the suspense, like Grace Yac, a sophomore accounting major, who said that the film “had me on the edge of my seat the whole time.”  Since Jordan and his co-screenwriter, Ray Wright, offer a fresh take on suspense, Madison Trimarco, a senior biology major, really liked “the fact that the audience discovers that Greta is in fact crazy in the beginning of the plot.”

Vincent Jones, a junior biology major, noted an interesting literary connection: “The movie reminded me of John Fowles’ The Collector, one of my all-time favorite books, except obviously changing the motive for the kidnapping.” He also commended Huppert, who “does an outstanding job as Greta; the way Huppert’s able to simultaneously showcase the love Greta has for Frances, while also portraying the disgust she feels towards her for leaving her, is a remarkable feat.” Natalie DiSandro, a sophomore undeclared major, felt similarly: “I have to give Isabelle Huppert a lot of credit for her depiction of the title character, Greta. Huppert was extremely subtle in her facial/body movements.”

Lest we not forget the disturbing subject matter, Yashira Caraballo’s (sophomore, English) commented on the film’s intense moments: “One of the creepiest scenes was when Erica (Maika Monroe, Frances’ friend and roommate), is getting followed by Greta and she keeps taking pictures, but every time Erica turns around, Greta somehow isn’t there.”

The devout film fans in the class loved seeing Neil Jordan talk in person: “the Philadelphia Film Center is inarguably the nicest theater I have ever set foot

in,” wrote Patrick Coyle-Simmons, a sophomore English major/film minor, “(but) what was truly wonderful was getting to listen to the director, Neil Jordan, speak about the filmmaking process after the screening. It was a pretty surreal experience for me, as an aspiring screenwriter, to get to hear from someone as notable as Jordan, who directed The Crying Game, Breakfast on Pluto, and the series The Borgias.” Jordan discussed the writing, filming, and locations: “I found it interesting how the setting was in New York, but the film was shot in multiple locations,” according to Nicole DuBose, junior accounting major. “I could not tell the differences in the location while watching the film.”

Even the students who didn’t respond to the film enjoyed the Q and A with Jordan, like Kevin Petruccello, a sophomore English major: “While I think that the movie is flawed…hearing about the things he changed from the original script and why provided really good insight into his creative process and what he thinks makes a good or interesting story.” Alexandria Figueroa, a sophomore English major, thought the film to be “like the typical modern-day horror film, with a troubled girl struggling to find her footing in the world, a trouble (or monster) arises, and the rest of the movie is about her dealing with or fighting it.”